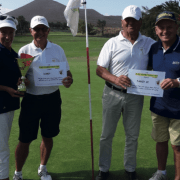 A record number of golfers took part in The Flintstones Rock Café Trophy, a Medal Play tournament which took place on 7th February 2020. The winner was Jean-Francois Crinquand, with an excellent 72 points. Jean-Francois lives in Mácher Bajo with his wife Nicola and their 3 rescued dogs. He’s also the secretary of Las Palmeras Golf Society.

11 days later, The Rest of the World beat England 7 – 3 in The Inter Nations Cup. It was a very tight affair in this Singles Match Play format played on Tuesday 18th February and the overall score doesn’t ́t reflect how close the individual games were. Team Rest of the World will defend their title in February next year.

The Las Palmeras Golf Society plays every Tuesdays and Fridays and we welcome visitors.

Fill Her Up!
Scroll to top