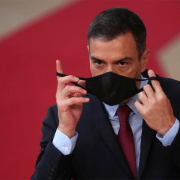 Spain’s prime Minister Pedro Sánchez has described the UK government’s decision to introduce quarantine restrictions on arrivals from Spain as “an error.”

The continuing fiasco of the British government’s decision to impose quarantine restrictions was compounded yesterday after the UK ignored requests from the governments of Spain, the Canaries and the Balearics to exclude the islands from the hastily announced quarantine, and instead voted to officially classify then as unsafe for travel with no evidence.

Throughout the day, reports suggested that there were tensions within the government, with disagreement between the Department for Transport and the Foreign office on how to treat the Spanish islands.

Finally, a Foreign Office spokesperson announced: “We have considered the overall situation for British nationals travelling to and from the Balearic and Canary islands, including the impact of the requirement to self-isolate on return to the UK, and concluded that we should advise British nationals against all non-essential travel to the whole of Spain.”

The spokesman provided no further explanation for the decision, and no evidence as to why the government has suddenly classified the Canaries as unsafe has been provided. In fact, the decision appears to be based on nothing more than the wish to remove the uncertainty that was caused by the Foreign Office excluding the Canaries and Balearics from its “unsafe for travel” list in the first place.

There is no doubt that the Canaries are currently safer than the UK, Germany or several other destinations that are still permitted to enter the UK without quarantine restrictions. Yesterday, El Pais newspaper printed the figures for positive cases per 100,000 cases in the last 14 days last Friday – the day when the British government took its decision. They were as follows:

Spanish President Pedro Sánchez criticised the UK’s decision last night, calling it “an error… based on the cumulative incidence of the virus in the entire country”. Sánchez pointed out that both the Canaries and the Balearics have lower infection rates than Britain and said “it would be safer to be in those places than in the UK.”  He said that he was still working with the UK to reverse the decision.

However, a lot of damage has already been done. TUI has announced that it will cancel all flights to Spain until August 9th, and Jet2 has also cancelled all flights to the island.

Airport updates
Living in a box

No explanations for Canarian exception
Scroll to top