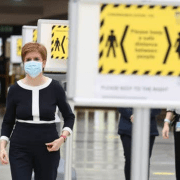 Questions still exist about the reasons why the UK Foreign Office’s advice for travellers was altered on Monday evening to state that the Canary islands were unsafe for travel. The Canaries and Balearics had previously been specifically excluded from the unsafe for travel warning applying to mainland Spain.

We contacted the British Embassy in Madrid for comment and received the following statement:

“We have considered the overall situation for British nationals travelling to and from the Balearic and Canary Islands, including the impact of the requirement to self-isolate on return to the UK, and concluded that we should advise British nationals against all non-essential travel to the whole of Spain.

We have received the Spanish request to exempt the Canaries and Balearics from the quarantine list, and will consider carefully the points they raise. We keep the travel advice and quarantine restrictions under close review, and will lift the measures as soon as it is safe to do so.”

The reason given , therefore, is that all of Spain is deemed to be unsafe. However, this does not explain why the Canaries and Balearics were excluded in the first place, given that the likelihood of infected people travelling to the Canaries to  get to the UK is as low today as it was on Saturday.

Some have claimed that the decision to close down the islands was simply taken to  show that the British government’s messaging was strong.  The paradox of stating that the Canaries were  safe while demanding that arrivals from the islands quarantined themselves had caused strong criticism after the Saturday announcement.

There is no date set for the review mentioned by the Embassy. Transport minister Baroness Vere yesterday held out the only glimmer of hope for the Canaries, when she said that future measures could be imposed on a regional basis following such a review. However, no time frame was mentioned.

Many consider that the damage has already been done. Yesterday, Nicola Sturgeon told Scots that “I wouldn’t, if you were asking me, be booking a foreign holiday right now.”, a comment that has been interpreted as explicit advice not to plan holidays.

Her warning is reminiscent of UK Transport Secretary Grant Shapps, who enraged airlines and travel companies in April when we warned people not to book summer holidays. Shapps later booked a summer holiday in Spain, which he has just been forced to cut short. He is now under quarantine in England.

This morning, culture Secretary Oliver Dowden told the BBC “Of course there is always going to be an element of risk in relation to foreign travel,” and said “We’ve had to take these quarantine measures to make sure we keep the disease under control in this country and we don’t import cases from Spain.”

Dowden may have been referring to the unconfirmed reports of 10 positive test results on British holiday makers who had just returned from Spain. These cases are alleged to have been the reason behind Chief Medical Officer Chris Whitty’s demand for immediate action, which resulted in the quarantine announcement.

Meanwhile, Fernando Simón, the director of Spain’s Coordination Centre for
Health Alerts and Emergencies, has said that the decision of the UK to advise against travelling to Spain is “good news” from the point of view of the country’s health. “It’s a problem we no longer have to worry about,” said Simón yesterday, “Because, from the point of view of health, it’s one less risk.”

Simón’s comments have attracted strong criticism from the hotel trade. Despite fears of Britons spreading coronavirus in Spanish resorts, this does not appear to have happened. The only new cases involving British tourists we have been aware of is the woman who arrived on Lanzarote recently  who was tested and isolated shortly after arrival, without spreading the virus.