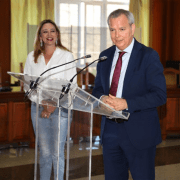 The Canarian councillor in charge of Public Works, Sebastian Franquis, has announced that the extension works on Playa  Blanca’s harbour are progressing far better than expected and could be terminated before the scheduled date of December 2021.

At a press conference at the Cabildo attended by Cabildo President María Dolores Corujo and Arrecife Mayor Astrid Pérez, Franquis announced that 70% of work had already taken place on the project by this week, the 30th month of a 48-month project that commenced in December 2017.

The councillor also denied rumours suggesting that Playa Blanca may be used as a cargo port by major shipping companies. “The aim of the port is to reinforce the connection between Lanzarote and Fuerteventura,” said Franquis, “It is not to open new routes on the Canarian Government’s behalf.”

Franquis also announced two of the priority road projects on Lanzarote. Firstly,  a €20 million  of the “northern axis” – the LZ1 road connecting Guatiza with Órzola. The tender for this project will be awarded this week and is likely to be licenced to commence next year, said Franquis.

The other immediate project is a €10 million remodelling of the road connecting the wealthy Arrecife coastal barrio of El Cable with the LZ2 main road and the Arrecife ring road.

Franquis also announced the construction of social housing for 400 households in the Arrecife barrio of Maneje, which lies between the capital and Tahiche, and indicated that a further 400 more homes may be built when  land is acquired for them.

Cabildo President María Dolores Corujo welcomed the plan and said that “Lanzarote is suffering an housing emergency which will be addressed by this project.”