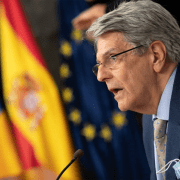 As new clusters of coronavirus appear in various localities of Spain, the Canarian government has denied that its recent increase in cases is a new outbreak.

A week after Spain left lockdown and entered the “new normality”,  several clusters of new cases have raised concern. These have mainly taken place in workplaces or hospitals and care homes, but a significant number have also originated with visitors from outside Spain.

The worst new outbreaks in in Spain have occurred in the northern region of Huesca, which returned three affected zones under Phase 2 lockdown measures recently. 90 positive cases have been detected in a fruit picking and packing company in the area.

Other workplace outbreaks have taken place in Lerida (31 cases), Gerona (31) and Valencia (6), while Bilbao and Valladolid have seen outbreaks of 45 and 26 cases respectively in hospitals and care homes.  Other, smaller, outbreaks in Spain have taken place within families, at pensions.

However, concern is being expressed at the relaxation of travel restrictions and the return of tourism, as a considerable number of the new outbreaks have been imported from outside Spain.

Murcía, for example,  has seen 19 positive cases and 60 people  quarantined after three passengers from Bolivia arrived with the virus on 3rd June; and a resident of La Coruña who picked up the virus in Brazil was the vector for nine cases. Two young Americans who recently arrived in Menorca have also tested positive and been quarantined.

The Canaries has also been included among the list of communities that have suffered a new outbreak of the virus after 25 cases were registered in Fuerteventura. All 25 had been passengers on two pateras (boats carrying migrants) which were intercepted off the coast of the island.  Moroccan authorities have reported a further 37 provisional cases on a boat that was about to set off for the Canaries from the city of Tarfaya.

Yesterday, Canarian government spokesman Julio Pérez  denied there was an new outbreak in the Canaries, saying that the progress of the virus on the islands was “satisfactory” and that the patera cases were an “exception” explained by the existence of an outbreak in the town they had set sail from.

Pérez said that the migrants were “fleeing from an intolerable situation” in Africa, and not seeking assistance from Canarian health services.  He said he had spent last weekend seeking isolated accommodation for several young migrants who had tested positive.