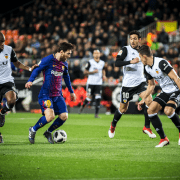 As Canarian hoteliers invite Spain’s elite footballers to conclude the season on the islands, Canarian health councillor Julio Pérez has confirmed that the Canaries will not seek to establish its own agenda for coming out of the lockdown.

Pérez’s statement comes after days in which local politicians have been calling for Spain’s national government to grant the Canary Islands powers to relax its lockdown restrictions. They point out that the Canaries appears to have passed the peak of infection, and that the islands have suffered much less from COVID 19 than certain areas of mainland Spain.

However, Pérez said “I don’t see any reason to end the lockdown before 26th April,” (the date on which the government’s current state of alarm laws apply), and pointed out that if the islands are in a more favourable situation than other regions “It’s because we’ve all stayed at home”.

Pérez continued “This situation will end, but not in the next few days. It makes no sense to talk about relaxing restrictions until the 26th April”.

However, there is increasing impatience in certain sectors to get the islands back to normal, as local businesses contemplate a gradual recovery for tourism.

One of the most ambitious ideas has been the proposal to play out the rest of Spain’s top division football season on the Canaries. This idea has been floated by Ashotel, the federation of hoteliers in the Tenerife province, and involves flying all 42 of the teams in the top two Spanish leagues to the islands, where they could stay in local hotels and play out the remaining fixtures in La Liga and the Second Division in Canarian stadiums.

Ashotel have formally approached the Royal Spanish Football Federation with the proposal, but have not yet received a response.

Emergency calls from the wild
Mascarilla 19