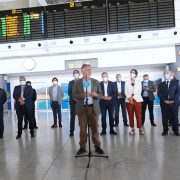 Canarian President Ángel Victor Torres has once again insisted on the importance of testing as a measure to protect tourism and public health on the Canaries. But is widespread testing at airports practical or even possible?

Torres spoke as Canarian officials welcomed the first tourist plane to Fuerteventura after the lockdown. The Condor plane from Dusseldorf brought 150 German travel agents, journalists and other travel professionals on a promotional visit to the island, and was greeted by several politicians and tourism professionals, all of whom stressed the safety of the Canaries as a destination.

Torres claimed that “science progresses at a dizzying rate” and said that rapid PCR tests will shortly be on the market that “will give a 100% reliable result in a matter of minutes via a less invasive sample of saliva.”

The 150 German arrivals had expected to receive tests at origin, but this proved impractical and Fuerteventura’s President Blas Acosta informed them they would receive voluntary  “serological” tests at their hotel.

However, like  previous statements, the Canarian authorities’ messages on testing have not been crystal clear.  A serological (blood) test, as referred to by Acosta, detects antibodies and can only discover whether a person has been exposed to the virus in the past, not whether they have it now.  It is fairly useless for detecting the presence of a contagious virus among tourists.

Torres’ claims for the existence of new, cheaper PCR tests also do not seem to be borne out by reality yet. Countries and regions that offer PCR tests generally charge over €100 for them, and results are available within 24 hours.  While US manufacturers have made  strong claims for newly developed home tests, these are not likely to be widely available for many months, and their reliability has been questioned.

Canarian insistence on the importance of testing also contrasts strongly with the more realistic approach taken by the Spanish government. Ministry of Health spokesman Fernando Simón  recently said that he did not agree with conducting mass testing at airports. “It could make sense when there is hardly any movement, but put yourself in the position of having to test 300  to 400 passengers at a time, with flight after flight arriving, and then having to give them results within a reasonable time before they scatter everywhere. I don’t believe it’s possible.”

However, testing 150 professionals is a good way to send a message that you take safety seriously, even if other recent flights to other Canarian islands have seen passengers subjected to temperature checks and questionnaires. Fuerteventura’s President said “the aim of this visit is to show the German press and travel industry that the island is a safe destination.”