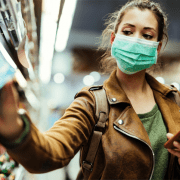 Health Minister Salvador Illa has announced that a new order will be published “in the next few days”  making mask use  obligatory in areas apart from public transport. It is highly likely that mask use will be made compulsory in shops and other enclosed public areas, but whether the law will include workplaces and the outdoors remains to be seen.

Last week, Fernando Simon, coordinator of the government’s emergency committee, refused to commit himself on mask use, saying  “Mask use is highly recommended, and  perhaps it’s necessary to overreact a little, but we also have to remember other things. The best mask is two metres distance.”

However, it appears that the Health Ministry has finally opted to follow the lead of other countries such as Germany, France and Austria, which have extended compulsory mask-use beyond public transport.

Illa made the decision during the video meeting with regional leaders that is held each Sunday, after establishing that all leaders were in agreement.

The other main decision taken was to abolish the existing time-slots for exercise in municipalities with a population of  fewer than 10,000 people. On Lanzarote, this will apply to the areas of Tinajo and Harïa.

Tias Ayuntamiento has appealed to citizens to discard protective gloves and masks in the grey or dark green containers for general rubbish that cannot be recycled.

The careless littering of protective single-use gloves has been a problem since the Coronavirus crisis started, while many who do discard them in containers put them in the yellow recycling container.  However , due to the possibility of  contagion, protective equipment is not recycled.

Carmen Gloria Rodríguez, the Environment Councillor for Tias, said “As well as creating an environmental problem that is difficult to evaluate because of its scale; and as well as contributing to the huge problem of plastics in our oceans, the careless disposal of gloves and masks could cause a risk of contagion for municipal cleaning workers.”

Government amendments to the Phase 1 rules mean that Lanzarote  can once again go sport fishing or hunting, always according to the regulations already in place on the island.

Shops and other businesses with an area of over 400 square metres will also be able to re-open, as long they provide clearly-marked zones for customer service.

Finally, the government yesterday confirmed that shops could hold sales from today, always as long as measures relating to distancing were observed.