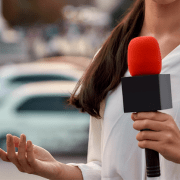 A man was fined over €2,000 after kissing a local Canarian TV presenter without her consent while she was broadcasting live in February.

Canarias TV presenter Raquel Guillán was presenting a piece live to camera at Playa del Reducto when a young man approached her from behind and kissed her on the cheek.

When Guillán picked up his wallet after he dropped it, the accused also pushed her and pulled her hair as he tried to retrieve it.

The man was convicted of sexual assault, fined €2,160 and issued with a restraining order.