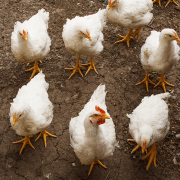 A 51-year old man was denounced for taking his chicken for a walk in Tinajo on 25th March. A video of the incident went viral on social media, but it wasn’t the only example of people using poor excuses to be on the streets.

On 27th March, a man was arrested and fined €720 in the La Vegueta area of Las Palmas after refusing a police order to return home. The man claimed he was “obeying orders from God to go into the streets, and would rather be arrested than return home.”

Another man was fined the same amount when discovered waiting in a doorway elsewhere in the city. The 52-year-old explained to police officers that he had come into Las Palmas in order to “have sexual relations with my girlfriend” – an excuse that does not fulfill the strict necessity criteria set down by law.

In Madrid a 77-year old man was fined after telling police he was “hunting Pokemons”, and two 30-year old men in Galicia were also warned for going into the street to smoke dope so that their parents wouldn’t find out.

Emergency calls from the wild
Lanzarote Will Bounce Back!