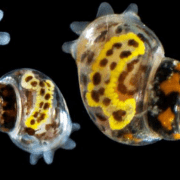 A new species of marine snail has been discovered on Lanzarote, living on black coral reefs at a depth of 60 metres.

The new species, which measures just 1 mm in length, has been named Rissoella Salasae in honour of Margarita Salas, the respected Spanish biochemist who died on the day the snail was discovered.

Researcher Jesús Ortea, of the University of Ovideo, explained that the snail had been discovered during a deep-diving expedition off Puerto del Carmen, in a zone of black coral that had hardly been explored before.
Puerto