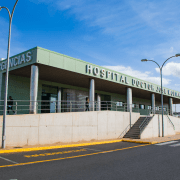 There were emotional scenes at Lanzarote’s  Dr José Molina Orosa Hospital yesterday as a 69-year-old woman was discharged 81 days after being admitted for coronavirus. She entered hospital on 31st March, was placed in Intensive Care two days later when her condition worsened, and remained in the unit until the 27th May, since when she has been on a normal ward.

This leaves only one other long-term patient at the hospital. Like yesterday’s patient, the remaining one tested negative some time ago and is only classed as  “active” because they haven’t fully recovered.

The single positive case on the island is a young man who came on the patera that arrived on 5th June. He is in quarantine but does not require hospital attention.

“ERTE’s are here to stay” (but not quite yet)

Spain’s President Pedro Sánchez yesterday pledged that “The ERTE’s are here to stay” as he presented a new plan to assist the tourism sector. ERTE is the name given to Spain’s furlough scheme, which has affected three million Spaniards and many thousands of workers in the Canaries.

The current ERTE provisions applying to the coronavirus expire on 30th June, but demand for an extension of the scheme has been unanimous in the Canaries,  where tourism  in meaningful numbers is unlikely to return until much later in the summer.

Sànchez’s statement was an attempt to calm nerves after negotiations to extend the ERTEs until September remain unfinished. The government’s Employment ministry has held several meetings with representatives of the country’s main trade unions and business federations without yet arriving at any agreement.

Make friends and discover Lanzarote on a bike!
Round the island for Rikki