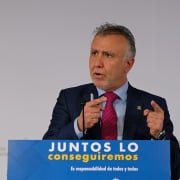 Canarian health workers have appealed for greater protective measures, after figures show that they are particularly vulnerable to contracting the coronavirus.

20% of all coronavirus cases on the Canaries are health workers, a figure that is almost double that of mainland Spain. As a result, unions, health associations and political parties have increased their demands for protective equipment.

Canarian President Ángel Victor Torres was one of several regional leaders who begged the national government for more protective material last week. However, Spanish President Pedro Sánchez has admitted that, due to intense international demand, these supplies have been delayed.

Fear of contagion is so high that some Canarian health workers have moved into second homes, or have hired holiday rentals during the lockdown to avoid infecting family members. On Lanzarote, the Cabildo has placed apartment complexes at the disposition of health workers and security agents.

Meanwhile, detailed guidelines have been published as to which workers are classed as “essential” for the next fortnight, during which non-essential workers must stay at home.

Essential workers include those employed in the sectors of food, medicine, healthcare, veterinarians, opticians, hygiene products, the press, fuel, tobacconists, telecommunications retailers, pet food, internet vendors and dry cleaners/launderettes. Banks will also remain operational, and mechanics will service the freight sector, but will not be open to the general public.

Restrictions have also been introduced forbidding funeral vigils. Velatorios, or overnight wakes, are a common feature of Spanish funerals. However, the Ministry of Health has temporarily suspended the practice as “distancing measures cannot be guaranteed”. During the lockdown, funerals and cremations may only be attended by three family members or friends, as well as a priest or equivalent figure.

Over the weekend several more cases were reported on Lanzarote, bringing the overall total of cases to 48. Of these, 44 cases remain active: 19 are in the Doctor Molina Orosa Hospital – four of them in intensive care; and 25 cases are isolated at their homes. Of the four remaining cases, three have died and one has made a full recovery.

Make friends and discover Lanzarote on a bike!
Lockdown tightened

Lanzarote on Screen 5
Scroll to top