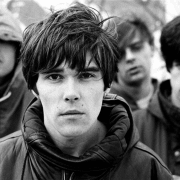 In the fifth edition of our new series, we take a look at some of this island’s most famous and memorable appearances on film, TV and video.

THE STONE ROSES – I WANNA BE ADORED / FOOLS GOLD

In 1989 the Stone Roses had already had a moderate UK hit with I Wanna Be Adored, but it was the follow up single Fool’s Gold whose influence would echo through the decade to come and put Manchester at the centre of Britain’s musical map.

Stone Roses guitarist John Squire had holidayed on Lanzarote as a teenager, and his artistic eye had been caught by the island’s strange, volcanic landscapes. So it was at his suggestion that a film crew headed for the island to film videos to promote the new single and the US released of Adored.

Both videos are similar, the band play, walk and throw stones while Ian Brown does a bit of monkey dancing in front of scenes of Timanfaya, all beneath a sky that has been artificially transformed into a purple haze. It’s probably the introduction to Adored that captures Lanzarote’s peaceful beauty.

Homes for Heroes
Scroll to top