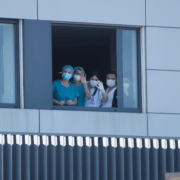 Worrying recent figures show that health workers and care home staff account for 20% of Spanish coronavirus cases, while the proportion is even higher on the Canaries.

Inadequate protection material, defective face masks and lack of testing are the main reasons for the appalling level of COVID 19 infections among Spain’s health professionals, according to the Collegiate Medical Association. The proportion of victims in the health sector is the worst in the world – almost double that of Italy.

Although six weeks of lockdown appears to have been successful in controlling the spread of the virus among the general population,  a persistent amount of cases are still being reported in hospitals and care homes.

The nursing union SATSE estimates that 60-65% of new cases are nurses and has officially complained to the WHO and the European Commission about the  lack of protection afforded to health workers.

On the Canaries the proportion of infected health workers is even higher, at 24,2%. This figure may reflect the islands’ relative success in containing the virus from spreading into the wider community, but still hints at worrying shortcomings in protective measures, especially on the worst-affected island, Tenerife.

Lanzarote has doubled testing in nine days, carrying out a total of 1,177 people on the island. On 15th April, 557 people had been tested since the start of the COVID 19 crisis, but the arrival of new equipment on the islands has allowed this figure to be more than doubled. 669 “rapid” tests have also been conducted, but only in conjunction with more conclusive PCR tests.

Cabildo President María Dolores Corujo also announced that the Dr José Molina Orosa Hospital would be collaborating with the Cabildo’s Statistics Department to carry out random tests on a cross-section of the island’s population. This will form part of a national project to establish the extent of the virus throughout Spain.

Spanish government sources yesterday poured cold water on Canarian plans to permit different groups of people outside at different times of day. Discussing the exit from the lockdown, Health Minister Salvador Illa stressed that “It is the central government which will direct this process” and clarified that the government had no intention of delegating powers to the regions on this matter.

Referring to the Spanish government’s decision to allow children under 14 outside from 9am to 9pm from tomorrow, and the conflicting Canarian proposal to limit them to just three hours from 4pm to 7pm., the government said “It’s not acceptable that the Canaries, for example, establishes times for children’s outings that are different to those of the central government.”

On Lanzarote, a woman from the Haría municipality aged “at least 70” was reported to be the island’s fifth coronavirus death yesterday. The victim passed away after spending several weeks in the Dr José Molina Orosa Hospital’s intensive care unit.

Airport updates
“This drama unites us”

How Coronavirus Swept the World
Scroll to top