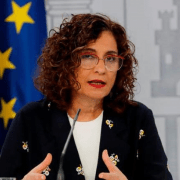 Spain’s council of ministers has finally announced that the ERTE (furlough) schemes for companies affected by the coronavirus crisis will be extended until the end of September. Assistance for the self-employed will also be extended to the same date.

The announcement, made by Tax Minister María Jesús Montero,  comes after weeks of tough negotiations with business federations, trade unions, associations for the self-employed and social platforms, and reflects one of the most important investments that Spain has made to protect its business fabric, which is estimated to cost more than 20 billion from beginning to end.

The decision will come as a relief on Lanzarote, where up to 19,000 people – a third of the active work force – have been suspended on ERTE schemes since the start of the coronavirus crisis.

Some conditions will not change; for example, companies will still not be permitted to hire new staff or take on part-time workers if they still have employees who are suspended. However, the terms of the extension will also depart from the conditions of the current scheme, which exonerated businesses who suspended all their staff, and self-employed who had lost all income, from social security payments. From July, Companies and the self-employed will be expected to pay contributions on a sliding scale, with those with less than 50 employees expected to pay 70%, 60% and 35% in July, August and September respectively.

Businesses that have taken on some suspended employees will have to pay more contributions for those employees who remain suspended, in an attempt to incentivize the return to work.

Provisions have been made for businesses to suspend employees again in the event of new outbreaks or lockdowns, and the conditions of these ERTE schemes will be similar to those that have existed up to now.

Canarian president Ángel Victor Torres welcomed the announcement from Madrid, and was particularly pleased that the agreement includes special conditions that may permit further extension of ERTE schemes beyond September in ultra-peripheral regions of Spain.

“Our dependency on sectors that will take a longer time to get back on their feet , such as tourism and sectors related to catering and commerce makes us the the region that was in most objective need of the extension of the ERTE schemes,” said Torres yesterday.

The approval of the extension means that suspended employees and the self-employed will still receive payments, although when they will be made is still uncertain. The coronavirus crisis placed such a strain on the social security system that hundreds of thousands of payments were delayed for up to two months or more.

If you’re a business owner, self-employed or an employee who is affected by an ERTE scheme it is highly recommended that you seek professional advice about your particular situation.