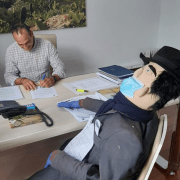 The discharge of the last active case of coronavirus on Lanzarote yesterday means that the island is currently “Covid-free”, with no active cases nor official presence of the virus.

The final patient was a 64-year old man who was admitted on 23rd March and moved to intensive care the following day, where he stayed for almost two months until  21st May. Since then, he has been recovering  on a ward and his case remained classified as active, although he had tested negative several weeks ago.

The news occurs just as Lanzarote reopens to tourism, with a Ryanair plane from Manchester arriving yesterday. However, the Spanish government yesterday confirmed in a meeting with the German foreign minister Heiko Maas that tourism could be closed down again if Spain reaches a figure of 50 cases per 100,000 inhabitants in a week. Such a decision, if taken on a national basis, would penalise the Canaries, which has never come close to this figure.

Haría’s Mayor Alfredo Villalba yesterday issued an official pardon to Don Facundo, the effigy who is burnt on the town’s bonfire every year on the night of the San Juan celebrations.

San Juan celebrations are held all over Spain on 23rd June, and the saint’s day celebrations run alongside older pagan traditions celebrating the summer solstice. Bonfires are lit, young men show their bravery by leaping through the flames and the evening is a popular social occasion celebrated with barbecues and fireworks.

The event has special significance in Haría because San Juan is the town’s patron saint.

Don Facundo, a symbol of bad omens, is burnt on the towns bonfire and the town’s Fire Dance has become a spectacular and popular recent tradition.

However, although the celebrations were cancelled this year because of the coronavirus crisis, townsfolk have still created Don Facundo.  Mayor Villalba said that the effigy, wearing a face mask and gloves in line with safety measures,  presented himself at the Ayuntamiento early in the morning with an official request for a pardon, which was granted.