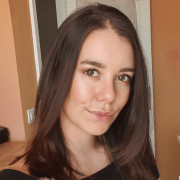 Hairdressers are open once again, so yesterday Gazette designer Sabrina Suppers broke out of lockdown to get her hair cut at Sculpture Salon in Puerto del Carmen.

Since last Monday, hairdressers and beauty salons have been able to open their doors to clients again, under strict conditions of hygiene and physical separation. And after seven weeks of lockdown, Sabrina’s hair was in need of some special attention.

“My hair was in a state,” says Sabrina “It was dry, tangled up and had started to fall out. My doctor has said it might be due to stress from worrying about the lockdown, but I think it could be lack of vitamins, too, as my flat has a small balcony and doesn’t get much sunshine.”

After booking an appointment over the phone, Sabrina went to Sculpture Salon in Puerto del Carmen, where Paul Geraghty cut her hair. Paul told us “We were overjoyed to re-open on Monday, although frustrated with the government changing the rules at the last minute. Still, it’s been great. We’ve had a busy week and are fully-booked through to Saturday afternoon. “

As well as regular disinfection, strict distancing rules between clients are observed, but in hairdressing there’s one interaction that simply can’t be distanced, which is why both hairdresser and client have to remain fully masked throughout the session.

This was the strangest thing for Sabrina. “It was a bit annoying when he brushed my hair, as it often caught the elastic of the mask. But the oddest thing was not being able to actually see the haircut until I left the salon. Paul also said he’d found it more difficult to fit the cut to the face.”

Paul also says he’s had to adapt to the changes “Not everyone’s aware of it,” he told us “But there’s an element of putting on a show when you’re cutting hair. A lot of it has to do with communicating  with the client using facial expressions  – smiles, those “wow” looks, that sort of thing – and when you’ve got a mask on that’s impossible.”

Paul washed, conditioned and cut Sabrina’s hair in layers, adding volume that hair loss had depleted, and even though she didn’t see the full effect until later, she’s impressed. “It looks pretty and I’m really pleased with it, “ she says

Perhaps it’s that pleasure that’s the really important thing.  The re-opening of hairdressers has already been welcomed throughout Spain, which places great importance on appearances, and the morale-boosting effect on a nation that’s spent seven weeks without a snip, a trim or a tint could be priceless.