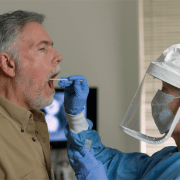 Lanzarote and the Canaries continue to make promising progress in slowing down new coronavirus infection rates. However, with four deaths the total of fatalities on the islands has now reached 202.

On the Canaries as a whole, the total of new infections yesterday was 135, the lowest daily total for 28 days. Figures have remained relatively stable below the 250 level for a week and the reproductive number (R0) is 0.8. Four deaths were recorded yesterday: three on Gran Canaria and one on Fuerteventura.

On Lanzarote, the number of active cases has also fallen drastically once again, partly because of the discharge of 73 patients who are now clear of the virus, and partly because only 16 new cases were detected yesterday. Lanzarote currently has 418 active cases and 11 patients in hospital, two of whom are in intensive care. A 60-year-old man who died at the weekend was the eighth fatality on the island, and the second to die in the “second wave” of the pandemic.

The Canarian Health Service lists the Accumulated Incidence rate for the last seven days as 44 cases per 100,000 residents in Tías, 4.5 in Teguise, 18 in Yaiza and 224 in Arrecife, which remains by far the worst-affected municipality.

In the Canaries as a whole the 7-day AI rate is recorded as 72.95 per 100,000 in the latest report by Spain’s Health Ministry . This figure is well below Spain’s overall national figure of 121.8 cases per 100,000 citizens, and has been steadily declining over the last week. The key statistics to watch out for are when it falls below 50 per 100,000, which is the threshold Germany uses to assess its travel advice; and the threshold of 20 cases per 100,000 that is used by the UK government.

The straight and the curved
Scroll to top