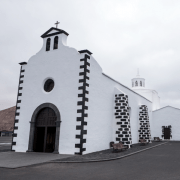 Today is the feast day of Our Lady of the Volcanoes, the patron of Lanzarote. It’s Lanzarote’s principal public holiday, and still an important event despite the cancellation of this year’s fiesta because of the Covid-19 pandemic.

Nuestra Señora de los Dolores (Our Lady of the Sorrows) is a widespread image in the Catholic world, and just one of several virgins venerated on Lanzarote. The Virgin of Carmen and Las Nieves (the snows) are perhaps the two other most famous ones.

In the past, images of the virgin were carried down to the churches in capitals in  processions known as bajadas (descents) . The most famous bajada on the Canaries takes place on El Hierro every four years, when the tiny Virgin de los  Reyes is carried down from her mountain-top retreat to Valverde.

Lanzarote’s original patron, the Virgin de Los Nieves, also had a bajada in days gone by, when the faithful carried her down to the old capital of Teguise, but this tradition has now turned into a romeria (pilgrimage( up to the desolate cliff-top church overlooking Famara. .

The Virgin de las Nieves would probably still be Lanzarote’s patron if it hadn’t been for the miracle of 1736, when legend relates that the priest of Mancha Blanca thrust a cross into the earth as a river of lava approached Tinajo, begging for the aid of the virgin to stop it.

The lava stopped, and the villagers promised to build a church in honour of the virgin. However, they soon forgot their pledge until, several years  later, a young shepherd girl reported being approached by a sad looking lady while watching her flock, who told her to remind the villagers of the it promise. After being taken around local churches on a kind of identity parade for Virgin Marys, the girl identified her visitor as the Virgin of Los Dolores.

The church was built, and the image of the virgin helped stop another volcano erupting in 1836. Over time, and only on Lanzarote,  the virgin at Mancha Blanca has become known as Our Lady of the Volcanoes, and is the object of the island’s largest religious gathering – a romeria that takes place every September and attract thousands of islanders in traditionbal dress to Mancha Blanca.

Our Lady of the Volcanoes has left Mancha Blanca for bajadas to Arrecife twice, once following the end of the Civil War in 1939, and again in 1966 for a huge rally for the Irish priest Father Patrick Peyton’s Family Rosary Crusade.

Although the coronavirus has meant the cancellation of this year’s fiesta at Mancha Blanca, some individual pilgrims have still been spotted making their way to the church, and masses will be held for the island’s patron all week.

Today is a public holiday throughout Lanzarote, although the farmers market at Mancha Blanca, opposite the unique black-and-white buttressed church will be held.

When the freeze ends
Scroll to top