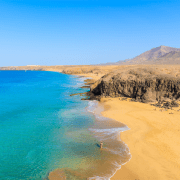 It could be back to the beach from Monday if the government approves the Canaries’ request to enter Phase 2. The Canarian government are confident that all the islands will follow La Graciosa, EL Hierro and La Gomera and enter phase 2 of the lockdown exit plan next Monday, after regional health officials presented Spain’s health ministry with official data to support their request to be allowed to move to the next phase.

The Canarian government are confident that all the islands will follow La Graciosa, EL Hierro and La Gomera and enter phase 2 of the lockdown exit plan next Monday, after regional health officials presented Spain’s health ministry with official data to support their request to be allowed to move to the next phase.

The Canarian director general of public health, Juan Carlos Alemán, said “the curve of the epidemic has flattened. There are very few new cases and suspected cases are proceeding within expected parameters.”

It’s to be expected that there will be new cases”, added Alemán, “The virus is still out there, and the more we move the more it circulates. What would be worrying would be if there were no new cases, as that would mean we’re unable to identify them.”

Of the 2,294 cases registered in the Canaries since the start of the crisis,  just 22 cases have been recorded in the last week, with a total of 211 new cases in the past month. Lanzarote has not recorded a new case for 10 days.

Beaches will also be opened to the public again in Phase 2, as long as distancing of 2 metres is observed.

Spanish President, Pedro Sánchez  faces an uphill task persuading parliament to vote in favour of a final, month-long extension to the  State of Alarm.

The PP, who abstained in the vote for the last extension, have now declared that they will vote against any further extension, no matter how long. Their secretary general, Teodoro García Egea, said “Pedro Sánchez’s dream is a permanent state of alarm. Spain needs to get in gear, and a lockdown is the only option for a government without ideas, without equipment and without plans for the future.”

García Egea also asked “How will tourism work with no tourists?”, and called for a lifting of the two-week quarantine on foreign visitors. He also suggested that Spain agrees “Sanitary corridors” with neighbouring countries, so that tourists can come to Spain without risk.

The PP’s opposition has been crystallised by the government’s refusal to permit Madrid to enter Phase 1 of the lockdown exit plan last week. The capital’s PP leaders have accused Sánchez of “ruining “ the capitals’ economy, and have expressed their support for street protests that have taken place in wealthy, PP-voting, areas of  Madrid.

Nevertheless, it’s not the PP’s opposition that will worry Sánchez as much as the refusal of Ciudadanos to support the extension. The centre-right party were vital to the passing of the last extension, but have stated that they are unhappy with the proposed length of this one, and have also expressed dissatisfaction with what they see as Sánchez’s continued concessions to regional nationalist parties in Catalonia and the Basque Country.

Sánchez will also have to conduct a delicate dance with those regional parties, many of whom see the perfect opportunity to negotiate further concessions.

The vote will take place tomorrow.