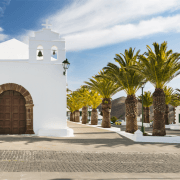 On 28th of May, the two Covid 19 patients remaining in the Dr José Molina Orosa Hospital tested negative for Covid 19. For almost 24 hours, Lanzarote was free of the virus until a positive case arrived from Madrid and was immediately quarantined.

The 77 days that passed between Lanzarote’s first case and the brief allclear has been eventful. As Spain mourns its thousands of dead, we look at how the lockdown progressed on Lanzarote and how a small, tourist hotspot managed to defy the odds.

On Thursday March 12th, the world was already beginning to wake up to the full consequences of the new virus detected on New Year’s Day in Wuhan, China. On the previous Monday, Italy had imposed strict lockdown restrictions on its entire population after suffering more than 9,000 cases and 200 deaths, and in the Canaries, the Costa Adeje Hotel in Tenerife had just released over 1,000 quarantined guests after an Italian doctor holidaying there had tested positive.

So it was no surprise when Lanzarote announced its first cases that Thursday. They were two Spanish tourists from Madrid who had arrived to holiday in a hotel in Playa Blanca the day before. When one of them developed symptoms, and was contacted by a relative who had tested positive back in Madrid, they informed the hotel and Canarian health authorities immediately locked them down in their hotel room.

Spain announced its strict lockdown on March 14th, and Lanzarote announced its third case on that day. On the following day, it was announced that Laura Callero, Tias’s health councillor and a nurse at the emergency department of the hospital, had tested positive.

Callero’s case was interesting for two reasons: firstly it highlighted the immense risks that health workers were taking and situated health establishments as one of main centres of contagion; secondly, it showed that testing was not infallible – hers turned out to have been a “false positive”.

On 24th March a 71-year-old German resident of Yaiza became the first Covid 19 death on Lanzarote. He was followed two days later by an 80-year-old Briton. On the 28th a local Lanzarote woman became the third fatality.

Late March and early April were the most hellish days of the pandemic in Spain. Cases seemed to be multiplying overnight, and horrific tales emerged from Madrid of ice rinks being used as morgues and dead bodies found in abandoned private care homes.

Care homes became a focus for the virus everywhere, including Lanzarote, where the Las Cabreras residence in Tahiche was closed down and disinfected after members of staff tested positive.

The lockdown was extended and toughened in the third and fourth weeks, and this seemed to finally give results, with cases starting to drop all over the Canaries in early April. Since then, it’s been a long story of curves flattening, and a slow and gradual release from lockdown.

Despite the occasional flurry of outrage on social media. Lanzarote has observed the lockdown well, and displays of solidarity have been hugely moving. They include convoys of emergency vehicles parading in support of health workers, rounds of applause form balconies and the rainbow posters seen hanging everywhere.

However, the epidemic also brought severe economic hardship for hundreds who suddenly had no income, no food and no opportunities.

Charities such as the Cruz Roja, Emerlan and Caritas have been working harder than ever, while new heroes such as Nadie Sin Comer have popped up to do their bit.