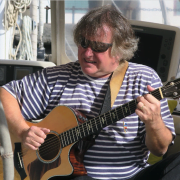 Adrian Bambrough is a very familiar face on the island, having been a regular visitor since childhood. Julie Helliwell met with him to learn more about his life here for the last 11 years, plus his recent musical challenges and international adventures.

How long have you been here?

I’ve been coming to Lanzarote on holiday since I was a child. My Dad bought a villa in Nazaret in the 70s and when he retired, we came every year. I had my first gig in 1989 at The Sussex Tavern in Centro Atlantico. I should have stayed then, but I sailed a boat back to Falmouth, and got on with life in England.

When my Dad died in 2007, I decided to give the island another go. I started with karaoke nights and then got involved in a duo. It stemmed from there and I’ve been in several bands over the years, plus played solo. I’ve also always written songs and have sold the rights to two of my original songs.

What can people expect from your gigs?

I don’t use backing tracks, so I am completely acoustic. I change my act all the time and play what the audience want, plus I’m always learning new songs. I pride myself on the fact that I can play any genre, and there’s always something to float your boat because I can play 2,400 songs.

How did you get involved in the music scene in America?

My aunt was a Hollywood agent involved in George Lazenby being cast as James Bond. She’s the matriarch of the family and we visit her every year in Palm Springs. When we first started going over, I had one gig, then two the following year etc. I now do a tour every February around San Diego, San Pedro, Morro Bay, Pismo Beach and Monterey.

This year I’ve also been invited to play at the October Songwriters Festival in Dripping Springs in Austin. I’ve been rehearsing my own songs, as you can’t play covers, use reverb, an iPad: it’s totally raw. I will be writing a blog about the trip on www. adrianbambrough.com.

Tell us about your recent fundraising concert.

After my daughter Clare died suddenly from cancer last year, I couldn’t write anything. I’d lost my creativity and I had to do something to move on after losing the big love of my life. I wanted something good to come out of it, so I contacted the hospital that she died in (and had previously worked in) – Wexham Park Hospital, Slough. Palliative Care isn’t funded by the NHS, so I decided to hold an event in Clare’s memory to raise money for the hospital that looked after her so well. I did a concert on 2nd October and we raised £1,000 to go towards staff training and a tranquil hospital garden.

Sometimes I write lyrics and music at the same time, other times it’s the melody first. I might be driving or talking to someone and I think, “that would be a brilliant lyric” so I’ll write it down. It can take as little as 3 minutes to write a song. Those ones are the best, and the ones that you have to keep working at, I’m often not happy with in the end. I’m looking forward to writing some new songs when Liz and I go on holiday in January.

I have two albums out at the moment that I sell at my gigs and via my website. One is called “Short Stories”, and the other is “Pieces of my Heart. I’m ready to start making another CD because I love Lanzarote and love what I do. I consider myself very lucky and after a diving accident in June where Liz saved my life, I live every day like it’s my last. It’s given me the impetus to carry on after what’s been a very difficult year. Music has always lifted me and got me through things and I’m so grateful that I have it in my life.

Eye in the sky
Face to Face: Mayor of Yaiza