Goat’s cheese is one of Lanzarote’s finest products. Shaun Addison and Sabrina Suppers visited the Queseria El Faro near Teguise to find out more. – Interview with Omar Viña, owner of Quesería El Faro 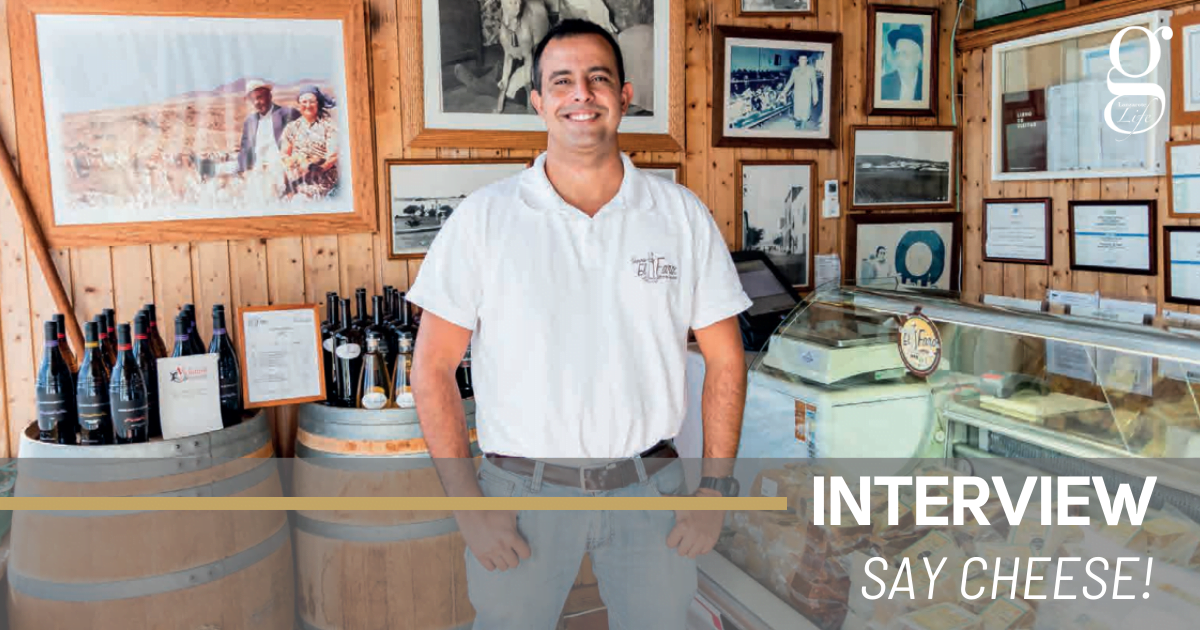 There are 22,000 goats on Lanzarote, and 2,500 of them can be found at the Agro-Industrial Complex between Teguise and San Bartolomé, where they are milked daily, producing 2,400 litres of fresh milk.

Omar Viña, who took over the dairy three years ago with his brother, says that the coronavirus crisis has hardly affected the islands cheese industry at all “If anything, its confirmed that our product is of the first importance,” he says.

There are 15 legally registered dairies on Lanzarote. Other cheesemakers exist, but their products are not health-registered and pose a serious threat to the licensed cheese sector, according to Omar, who is also the president of the Lanzarote Association of Artisan Cheesemakers.

I ask if the establishment of a Denomination of Origin, such as the one granted to the island’s wines, would help protect the industry, but Omar disagrees. “It would mean greater protection, but a denomination would also mean that cheeses would have to be prepared in a more uniform manner,” he says. “Without it, we have more freedom to innovate.”

This means that Lanzarote dairies can make cheeses from pasteurised or raw milk – “There is no tuberculosis or brucellosis on the islands, so raw milk cheeses are safe”, says Omar – and dairies can also use milk from sheep and cows, or make cheese with a mix of milks. Lanzarote also offers parmesan-type hard cheeses and blue cheeses , and El Faro also make smoked queso tierno – a delicacy that is preferred on the western islands and which the dairy owes to the background of Omar’s mother, who hails from La Palma.

Like most other dairies on the island, El Faro’s chief product is queso fresco – the mild, bland, fresh cheese that’s one of the island’s most popular staples, eaten for breakfast with quince or guava jelly or in a sandwich with ham or tomatoes.

But a full range of cheeses is made at El Faro. A smaller, 1 kilogram cheese that is over 20 days old is classed as tierno (tender); after 50 days it is semicurado (half-cured) and a cheese that has matured for more than 100 days is cured (curado). Each type has a distinct texture and flavour, as cheese ages, ferments and matures. Omar says his favourite cheese is “queso fresco, for breakfast” or “a curado with a glass of wine”.

Older cheeses are often rubbed with olive oil, or rolled in paprika (pimentón) or gofio to add colour and a little more protection. However, recently dairies have been using cumin seeds, provencal herbs and even curry powder. Cheeses are even being made with herbs such as oregano flavouring the cheese itself.

Later, employee María takes us to meet some of the goats at the dairy. These are cabras majoreras – Fuerteventura goats – a particularly tough strain that is found on the Eastern Canary islands. They come in all colours, from black to white, with light tan, deep chestnut and plenty of spots and patches in between.

48 nanny goats at a time file into milking pens where they munch on grain as suction pumps are attached to their udders and milk pulses through transparent pipes. Milking needs to be done daily, or the goats will suffer from mastitis. The goats seem fairly happy about the process, taking their places willingly, and after milking, they return to an enclosure outdoors where two males can be seen courting. “It’s mating season,” explains María, as she leads us to meet the results.

In another shed are the kids that are separated from their mothers and raised on powdered milk in a separate part of the farm. Curious, friendly and playful, these little creatures will either form the milking herd of the future or be destined for the island’s meat industry, depending on their sex.

Most goats on the island are kept in enclosures such as this, but some smaller farmers still put their livestock out to pasture, where there is enough vegetation to make it worthwhile. “The wild plants are sparse and poor quality,” Omar says.

The cheese that results from the milk of these goats is one of the island’s delicacies, available in several of the best local supermarkets, as well as the island’s tourist centres and many of its best restaurants. Omar says “We send some cheese to mainland Spain, but to be honest, it’s so highly valued here that not much of it gets off the island!”