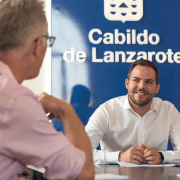 At the age of 32, Jacobo Medina is one of the youngest and most visible politicians on Lanzarote, who became the secretary general of the PP party on Lanzarote last year and currently holds the vice-presidency of the island’s Cabildo after the agreement with the Socialists which ousted the Coalicion Canaria from power last year.

Medina is also the Cabildo’s Councillor for Public Works at a moment in time when this department will be crucially important, not only to renovate and renew the island, but also to provide employment. Shaun Addison spoke to him last month. Photo: Sabrina Suppers.

THE PP AND THE SOCIALISTS ARE TRADITIONALLY RIVALS, SO IT’S UNORTHODOX TO SEE THESE PARTIES GOVERNING TOGETHER IN THE CABILDO AND ARRECIFE. HOW IS IT WORKING OUT?

It works because of the things that unite us. Although we are separate on many issues, a good level of agreement exists about what needs to be done. But we’ve been here for a year now, and we’ve already sown some seeds and have started to harvest the fruits.

HOW HAS THE CORONAVIRUS AND LOCKDOWN AFFECTED THE CABILDO’S PLANS?

It’s been a severe blow, and we’ve had to change our plans to draw up a route map. This will prioritise four areas which will be vital following the crisis. The areas that need immediate attention are social services, public projects, employment and tourism.

DOES THIS AFFECT PUBLIC WORKS THAT YOU’RE IN CHARGE OF?

Yes. Obviously the first priority is the health situation, so we’ll be doing renovations to care homes, disabled centres such as Adislan and day centres. But another important aspect is employment – public projects bring jobs, and that will be vital in the near future. We’ll be carrying out several works all over the island.

There are many smaller projects planned (see next page), but some of the more visible works will include an aerial roundabout at the LZ2/LZ3 junction entering Arrecife and renovation of the Puerto Naos area in Arrecife that will include a park area.

WHAT ABOUT THE BICYCLE PATH BETWEEN COSTA TEGUISE AND ARRECIFE?

Work on that will be going on shortly, and I hope we’ll see that finished by next summer.

HOW ABOUT MORE LONG-TERM PLANS?

There are studies being carried out to make the LZ 40 road to Puerto del Carmen a double carriageway, and another major project to improve access to the General Hospital.

WHAT ABOUT THE EXTENSION OF PLAYA BLANCA PORT? THE PRESIDENT OF THE CABILDO RECENTLY ASKED FOR THE CANARIES TO ESTABLISH AN “EASTERN AXIS” BETWEEN LANZAROTE AND FUERTEVENTURA. DO YOU SEE THAT AS A FUTURE POSSIBILITY?

The Eastern axis arose as part of a request for special consideration in funding, but it’s true that Lanzarote and Fuerteventura together would have a greater GDP than Gran Canaria, and that the port will be vital for the development of the south of the island. But it’s a Canarian government project, not ours. The works are 70% completed, I think, and should be finished by December next year.

HOW ARE RELATIONS BETWEEN THE CABILDO AND THE AYUNTAMIENTOS, GIVEN THE EXISTING POLITICAL DIFFERENCES?

There have been attempts to stir up tension, mostly by some of the people we replaced here at the Cabildo, but the fact is that I have a good relationship with the Mayors. I talk to the Mayors of Tías and Teguise almost daily, even though they’re not from my party, and enjoy good relationships with the other Mayors.