Lanzarote Limpia is an organisation that has been doing wonders raising awareness of Lanzarote’s magnificent natural landscapes and how human negligence is damaging them. Last month, they organised a clean-up around the pechiguera lighthouse in Playa Blanca, and we went along to join them. 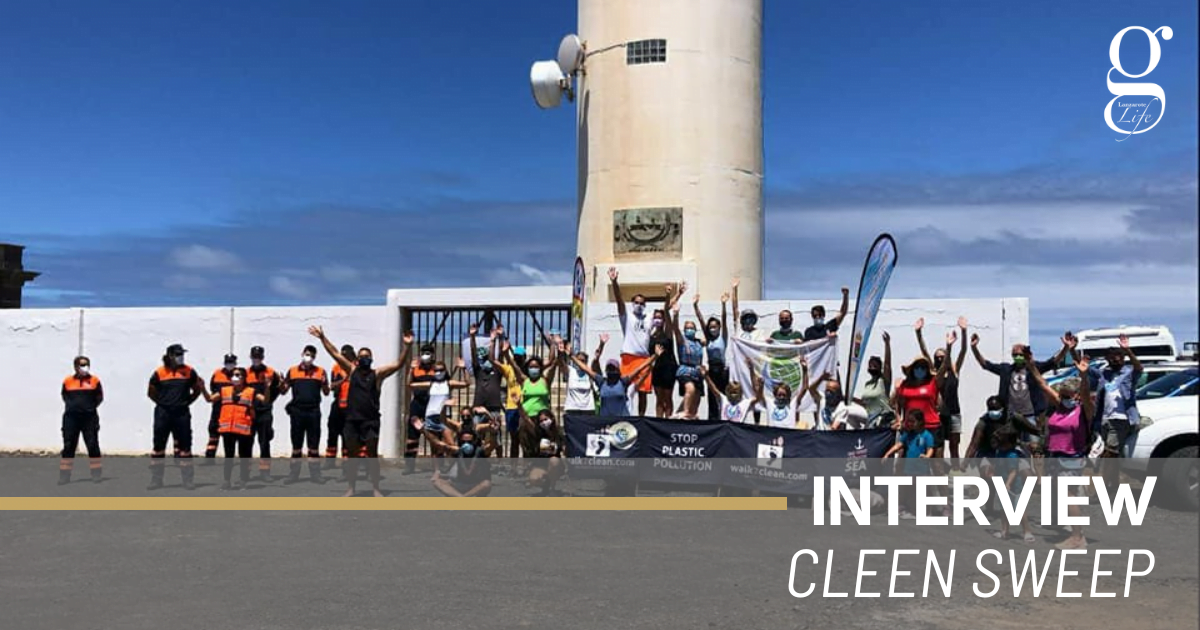 Built like a wrestler, with deeply-tanned skin and broad smile, Aduén Morales is walking barefoot around the rocky terrain around the lighthouse at Pechiguera. Welcoming new arrivals and organising the day’s activity. He looks like a typical Canarian muchacho, because that’s what he is, so it comes as a surprise when he suddenly starts talking in perfect, regional-accented English.

“I spent years teaching in England,” says Aduén, and he’s delighted that we’ve turned up to cover the clean-up campaign. “Take loads of photos,” he tells all the participants. “The point isn’t cleaning up – it’ll be back to the way it was soon – the point is to show people what we’re doing and raise awareness.”

Carol, from Haría is a regular on these clean ups. “The world is in a terrible state, “ she says “And we can see it here on Lanzarote, with all the debris that is washed up on the north coast, especially fishing waste.” and especially, cigarette ends. We need to class smoking as a littering activity.”

Carol believes cleaning up Lanzarote is “a sisyphean task” but that the social aspect of the clean-ups is important. “It’s a nice way to start your Sunday,” she smiles.

Tobi Heeb, from Switzerland, is a founder member of C-O-U-P (Clean Ocean Upcycling Productions) and has been involved in clean-ups on the island for several years. He says that the idea of these outings is not cleaning up, but instead, raising awareness and reminding people not to throw things away in the first place.

“We need to realise that what we’re throwing away are resources,” he says. “We are the only animals that have something called trash,” says Tobi “And we can see on these days, that we are literally, tossers.”

Tobi says that one of the main problems on the island is the deposits of crude oil that are washed up, especially on the north coast. “It’s black. So it’s camouflaged and we don’t see it, but there’s a lot of it there.”

On the subject of plastic, Tobi expresses a controversial opinion: “I started out hating plastic but now I think it’s amazing! It’s a precious material that we can recycle” he says.

Alina Kunz has come over from Fuerteventura with a bunch of fellow members of Limpiaventura, a parallel clean-up organization from Lanzarote’s neighbouring island. This bunch get 60-70 out regularly, cleaning up areas from Corralejo in the north to the wild beaches of Cofete and Jandía in the south.

Alina’s been doing clean-ups for seven years and has tried to get out every Sunday for the last six years. The lockdown and Covid restrictions have caused a lot of cancellations in the past year, but now things are pretty much back to normal.

Also present at the clean-up are members of Yaiza’s emergency services, whose presence is always required at mass events such as this, especially when people are venturing out in rough terrain or over rocky shores.

We grab a couple of sacks and litter picker-uppers, put our gloves on and head down the coast to save the planet.

Although the rocky shore is beautiful, with squealing gulls and scores of swift-moving crabs on the boulders, it’s not where most of the rubbish is. This part of the coast is constantly swept by strong currents and it seems that very little of the flotsam that is found further north is washed up here.

Tellingly, most of the litter we find comes close to areas where human beings are likely to walk. By the edges of pathways there’s a constant supply of broken glass, semi-decomposed plastic bags and cigarette ends. Actively looking for it, you suddenly realise how we fail to notice this sort of thing almost all the time in our daily lives.

Also, it’s clear that rubbish is not just large objects, such as bottles, cans or plastic bags. One of the cleaners is sitting, carefully examining a small area of ground for tiny pieces of waste, and has already found an impressive amount. Another cleaner tells us that she found hundreds of cigarette ends by simply digging a hole on a beach.

This sort of realisation is exactly what the project is about: reminding us that our waste is all around us, on large and small scale, and that collecting it all is an utterly impossible task. Instead, we need to stop creating it in the first place, and learn to use the waste we do produce in a more eco-conscious way.

Lanzarte Limpia can be found on Facebook, and clean-up campaigns take place most weeks.