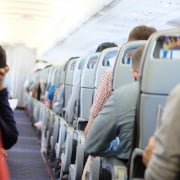 Lanzarote Airport was packed for days following the announcement of Spain’s lockdown as over 30,000 tourists struggled to get back to their homes.

TUI, Jet2 and Easyjet were among the first airlines to cancel all flights to Spain, but tourists continued to arrive on the island even as the lockdown commenced. It took the closure of most hotels and an announcement from the Foreign Office advising all British nationals to return home before most took the situation seriously.

Days followed in which crowds of tourists jostled for flights and information at Terminal 1.

Around 33,000 people were successfully evacuated during the week and Lanzarote is now estimated to have fewer than 3,000 non-residents remaining, mainly in holiday rentals.

On Sunday 22nd March, weary airport workers gathered in the terminal to applaud each other after a week few of them had ever imagined possible.