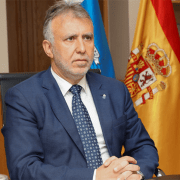 Canarian President Ángel Víctor Torres has said that he will continue to fight for tests at origin for tourists who wish to come to the Canaries.  Torres told the Cadena Ser channel that this topic was one he had continually insisted on at the regular Sunday meetings of regional leaders with national government.

Torres told the Cadena Ser channel that “a serological test that costs €20 should be carried out before anyone gets on a plane to spend their holidays here.” Torres acknowledged that the final decision would rely on other regions, and said “If they don’t do it at origin, we’ll do it at the destination.”

Torres did not provide more details about the tests he had in mind. The serological tests is an antibody test on a blood sample that only indicates whether a person has been exposed to Covid-19 in the past and may not identify newly-infected cases. More expensive and time consuming  PCR tests are required to diagnose positive cases of Covid-19.

Torres’s comments were partly prompted by news from the Balearics, which will prepare to receive its first post-lockdown tourists from Germany on Monday.

The Balearic Islands have decided that all arrivals must have their temperature taken on arrival and that they must fill in a questionnaire relating to their health.  PCR tests will only be required if symptoms are detected during flights, and visitors must agree to be part of a tracking scheme.

Spain’s Health Minister, Salvador Illa, has said that the Balearic measures could act as a pilot scheme for the rest of Spain, but the Canaries, with recent, painful memories of infected tourists, insists on safer measures. Ángel Víctor Torres has said that “according to our understanding, temperature checks aren’t sufficient.”

The issue is a gamble for both sets of islands. The Balearics appear to have opted to salvage their summer tourist season at the considerable risk of a new outbreak, while the cautious approach of the Canaries is likely to increase the negative economic impact of the coronavirus crisis on islands which are highly reliant on tourism.

No early Canarian exit from Phase 3

All of the Canaries will leave Phase 3 and enter the “new normality” on 22nd June, as scheduled. This will include the smaller islands of La Graciosa, El Hierro and La Gomera, who have been a week ahead of the rest of the islands until now.

Phase 3 passed the power to decide when to enter the “new normality” from central government to Spain’s regional governments. However, only the north-western region of Galicia has decided to leave Phase 3 this Monday. The Canaries had originally considered an early exit but finally opted for caution.

Madrid, Barcelona and five other provinces will remain in Phase 2 until the end of the State of Alarm on 22nd June, when the lockdown exit plan will cease to exist. This effectively means that a quarter of Spaniards will skip Phase 3 altogether.

The third patient
Scroll to top