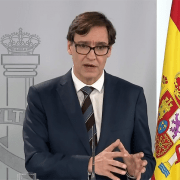 Spain’s Health Minister, Salvador Illa, has asked regional authorities to  propose fixed time-slots during which different groups of people may leave their homes.

The idea of time slots is being considered after fears among experts that an uncontrolled release will lead to a second wave of infections.  Time slots will keep different groups of people separated and will be easier for police and security forces to enforce.

Last Sunday, for example, children were allowed to leave the house for up to one hour between 9am and 9pm. The measure was widely popular, and many Spaniards were overjoyed to see children back in the streets again. However images of crowded streets in heavily populated areas of Barcelona, Las Palmas and elsewhere caused some outrage in the press and on social media.

Fernando Simón of Spain’s Emergency Health Committee admitted that some people had showed “a lack of prudence” on Sunday, but Salvador Illa said “99% of parents had behaved in an exemplary fashion”. Interior Minister Fernando Grande-Marlaska said there was no “massive flouting of the rules” and pointed out that the amount of police warnings and arrests had not risen.

The Canaries has already presented its proposals for time-slots. They suggest that older people can go for walks between 11 am and 1pm, while children under 14 can leave the house between 3pm and 7pm.  Two daily windows in the early morning and late evening have been proposed for those who wish to practice sports such as running.

These proposals were knocked back by Madrid’s government at the weekend, with a clear statement that regional proposals must not clash with national laws. However, it appears the idea of time-slots is now back on the table

The Canaries have also proposed measures such as allowing people out on alternate days depending on whether their house number is odd or even, which appear to be aimed at reducing crowding in heavily populated urban areas.

Later today, Pedro Sánchez will announce his government’s plan for leaving the lockdown and Canarian authorities are hopeful that he will permit the islands to go ahead of the rest of the  country in this respect. The Canaries is the community least affected by coronavirus in Spain, and the islands are not the only part of Spain where local authorities are becoming frustrated by a centrally-dictated “one size fits all” policy that treats relatively unaffected areas such as the Canaries and Murcia the same as hot-spots such as Madrid and La Rioja.