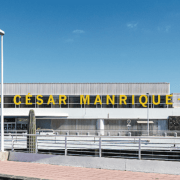 Lanzarote has appeared in a new advertisement produced by the Spanish government to promote domestic tourism.

The advertisement, which was introduced by President Pedro Sánchez last Thursday, begins with images of a bar opening its shutters, before showing a string of images of some of Spain’s most famous tourist attractions, including the Prado art gallery, Salamanca’s Plaza Mayor, The Alhambra in Granada  and the Camino de Santiago.

The narrator invites viewers to open themselves to new experiences, mentioning “the island that César Manrique designed” over a brief aerial shot of Montaña Bermeja near El Golfo.

The advertisement has been shown at prime time on Spanish TV, and is one of a series of measures to try and salvage the summer tourist season.

International visitors from 30 EU countries were legally permitted to enter Spain from today, but no international connections have yet been re-established from Lanzarote. International flights are likely to increase after July 1st.

Following the Canarian government’s failure to reach agreement on testing at origin, passengers arriving at Lanzarote from other countries will be required to fill in a form giving details of their medical history and full contact details; they will be submitted to a temperature check and medical staff will observe them for coronavirus symptoms. If a case is suspected, further tests and isolation will take place.