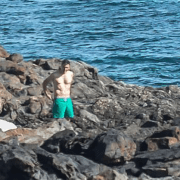 Pedro Sánchez, the president of Spain’s government,  will spend the start of his summer holidays on Lanzarote with his family.

Sánchez, who recently  broke diplomatic tradition by openly describing the UK government’s decision to place quarantine restrictions on arrivals from Spain as “ill-considered” and  “a mistake”, will arrive after a ministerial meeting on 4th August and stay at the “King’s House” – Then Royal Residence at Las Maretas near Costa Teguise, according to a report in OKDiario.

Hew will arrive with his wife, Begoña Gómez, and two daughters and the family will remain on the island for a week.

It’s not Sánchez’s first time on Lanzarote. He arrived on 29th December 2018 to spend New Year at the palace at Las Maretas, with paparazzi photos emerging of him bathing from the rocks in front of the palace.

Lanzarote has proven popular with Spain’s socialist leaders. José Luís Rodríguez Zapatero is famously fond of the island and holidayed at Las Maretas several times during his two terms in office from 2003 to 2011. Zapatero later bought a property in Famara.

The Royal Residence was built by King Hussein of Jordan in the late 70s, with architect Fernando Higueras and César Manrique both commissioned to work on the project. The Jordanian King later gave the property to King Juan Carlos I of Spain, who in turn donated it to National Heritage.

However, the Spanish royal family appear to have avoided the residence after Juan Carlos’s mother, the Countess of Barcelona, died of heart attack at La Maretas in December 2000.  The current King Felipe VI and Queen Leticia have only stayed there very briefly in 2005 with their young daughter Leonor.

La Graciosa has finally recorded its first case of coronavirus. A tourist from Catalonia who arrived on the island tested positive and has been isolated on the “eighth Canary island”

This is the eleventh active case of Covid-19 on Lanzarote. The others are seven migrants who arrived on a patera on the 8th July, and three individuals who arrived after visiting Mexico, Ukraine and the Dominican Republic.   Two Italian tourists who were isolated yesterday after the airport detected high temperatures have tested negative.

Make friends and discover Lanzarote on a bike!
Need to Know: The General Hospital

Smoking – Only for the lonely
Scroll to top