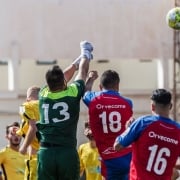 The season for the Rojillos is well and truly over; however, the top four teams in their league battled it out on El Hierro with one side being promoted to Spain’s Bronze league, Segunda B.

Normally, each of the top four sides would be drawn separately against a mainland club. Champions CD Marino would have had a match over two legs against a mainland league winner with the victor being promoted directly to Segunda B and the loser dropping into the quarter- final stage of the playoffs.

The three other sides would also be drawn against mainland clubs who would also be in the quarterfinal stages. It’s quite a complicated affair.

But these aren’t normal times, so the Spanish Federation sensibly decided to complete the playoffs provincially. From the 18th July until the final on the 25th July CD Marino, SD Tenisca, UD San Fernando and UD Tamaraceite played one of their club’s most important matches (check my Facebook or website for results, details below) and, by the time this goes to print, we’ll know which Canarian side will be playing their football in Spain´s third tier next season, along with UD Las Palmas B.

The venue for the tournament was the Covid-free island of El Hierro. At the time of writing I have never visited this mysterious small island but I’ve booked tickets with my wife for a short break in the hope of obtaining a ticket, as 50% of the normal capacity of fans will be admitted to these matches

Meanwhile next season many players from the island will be given their chance to represent UD Lanzarote, so it’s wonderful news that our two experienced captains, Rosmen and Ayoze Pérez, have already signed and will be bringing their wealth of experience to some of the novices.

At this moment there is no set date when next season will commence, though in all probability it will be in October.

Make friends and discover Lanzarote on a bike!
Testing, Testing

Police to crack down on gatherings
Scroll to top