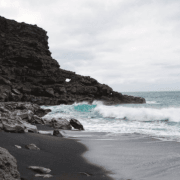 Most people come to the little town of El Golfo to do two things: dine in one of the fine seafood restaurants there, or look at the stunning green lagoon that lies just west of the town. But a smaller group of visitors, usually dressed in hiking gear and bearing trekking poles, can often be seen heading off in the other direction towards Playa del Paso.

This black sand beach, located in the heart of the massive lava flow that formed this landscape , is a mystically beautiful place. It’s been called the “secret beach” by some visitors, but in truth it’s no secret at all, and is easier to get to than you might think. The walk to the beach is just over 4 kilometres there and back, but the rough, rocky terrain makes it seem much further, and you’ll be needing a good pair of boots and maybe a stick or two.

You start at the children’s playground at the eastern edge of El Golfo, heading out onto a footpath that slowly rises until you’re overlooking some impressive cliffs. Waves are constantly pounding this part of the coast, and on days when the sea is particularly rough there’s a chance you could get a soaking, so stay well back from the edge.

Half-way into the walk you’ll pass a sign marking the Timanfaya National Park, and are advised to keep closely to the path from here on. You’ll pass a couple of the caves that this coastline is riddled with, but you’re not supposed to go into them.

You’re now in the area called the Sea of Lava, which flowed down to the ocean 250 years ago. All around you can see the two types of lava known by Hawaiian names: rough, sharp aa lava and smooth, striated pahoe hoe. There are bubbles, pipes, collapsed domes and other volcanic features, and low, rounded clumps of tabaiba, or balsam spurge, are the most common plant.

Shortly you’ll see the black sand beach lying below and in front of you, but you’ll still have to descend the cliff and go past the beach, doubling back once you reach the sandy track below.

On a sunny day, the beach is simply stunning, with azure waves crashing into foaming white surf on the jet black sand. Massive plumes of foam are thrown up as the sea hits tortured lava formations, making this an eternally dynamic landscape of colour, sound and motion. Often you’ll see brilliant sapphire-coloured By-The-Wind Sailor jellyfish washed up here; their “sails” still inflated like balloons.

But these jellyfish aren’t the only reason to stay out of the sea. This is the most unpredictable and dangerous coastline on Lanzarote, and bathing is a stupid idea regardless of how strong a swimmer you are.

Once you’ve had your fill of the scenery, it’s back up onto the cliff and to El Golfo, where you‘ll probably want to try some of that seafood.