Lanzarote returns to Level 2 today, after the expiry of the special Easter restrictions that have been in place for the last fortnight. 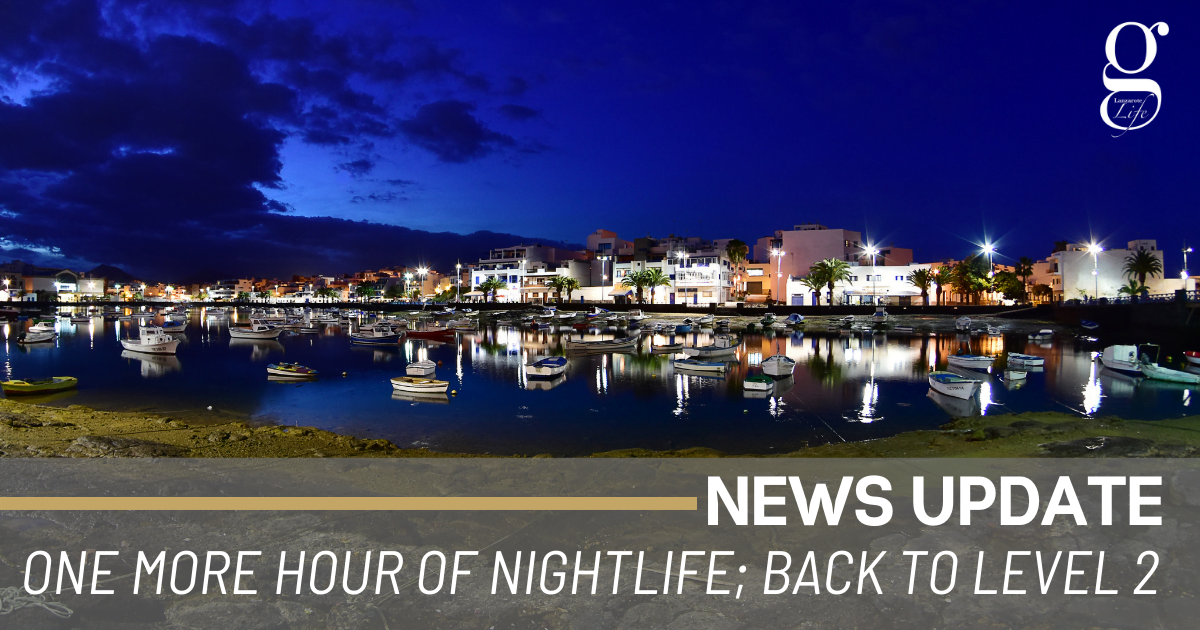 The most noticeable effect of Level 2 status will be an extension of the curfew to 11 pm. This will also be the hour at which restaurants and bars must close, although many will do so earlier in order to give clients the opportunity to get home.

The other main change is that up to six people are now permitted to meet in public instead of four. Bar owners with outdoor terraces can put another couple of chairs on each table to the maximum of six, but indoor tables are only permitted four.

Level 2 also permits Lanzarote residents to leave the island freely, without having to justify their journey.

Looking ahead, there doesn’t seem to be much chance of Lanzarote going down to Level 1 next week– the island has not managed a sustained reduction of infections to fewer than 6 cases a day, which is what this would require. There is also no evidence yet to show that Easter has caused a rise in cases.

As a result, the next big change we can predict with any confidence is the end of the curfew on May 9th, the date when Spain’s President, Pedro Sánchez, has announced that the current State Of Alarm will terminate.

The end of the State of Alarm will return much of the responsibility for Covid restrictions to the Canarian regional government, and while they may continue to dictate closing times and the amount of people permitted in gatherings, regional governments do not have the power to impose curfews.

On Wednesday, Spain also altered its new mask law after the furious response to it last week. Amazingly, they seem to have made it even more confusing than before.

The main objection to the law in tourist regions was that it banned sunbathing without a mask. The government’s response to this was to introduce a new annexe that permits people to take off their mask while resting “before or after exercise”.

Technically, the amended law still appears to ban maskless sunbathing unless you take a dip or do some star jumps every now and then, but the Canarian authorities have already indicated that, as far as they are concerned , the law will continue as it was before last week, allowing maskless sunbathing as long as 1.5 metre distancing is observed.

Airport updates
37% of active cases from “tourists and students”

An ancient trade
Scroll to top