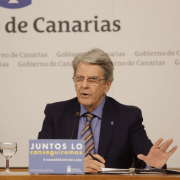 Compulsory wearing of masks in the Canaries will not be extended, the Canarian Government confirmed yesterday, although existing rules will be enforced more strictly.

The current rules make masks obligatory in any situations, indoors or outdoors, where 1.5 metre social distancing cannot be guaranteed. In practice this means that masks are normally worn indoors and are increasingly seen in crowded outdoor areas such as markets.

Masks must also be worn on public transport and in taxis, and by all occupants of any car containing people who do not live in the same house.

On Monday the Canarian government had announced it would extend mask-use, causing many to think it would follow several other Spanish regions which have made masks compulsory indoors and outdoors. However, yesterday government spokesman Julio Pérez said the epidemiological situation was still good on the islands   and “for that reason it is not necessary to extend mask use.” Instead, Pérez clarified that the government had decided to introduce stricter checks and greater vigilance of the existing rules.

Pérez’s claims about the island’s good performance are justified. The islands are still performing well despite the first serious post-lockdown outbreak of coronavirus on the Canaries, which has caused 11 positive cases so far. Six positive cases have been reported on Fuerteventura and a further five occurred on Gran Canaria.

The outbreak is believed to have had its source at a family reunion in a villa in Fuerteventura, where around 20 members of the same family gathered at the end of June. Epidemiologists from the Canarian Government originally believed that the virus arrived via a family member who had recently returned from Mexico.

This man claimed he asked for a test after spending several hours on a plane, but was refused by the hospital. He also insists that he cannot have been “patient zero” in the outbreak, because he tested negative when family members were traced.

Another possible source is the woman who first tested positive in Fuerteventura.  She claims she does not know whether she picked up the virus at work, in her daily life or at the reunion.

90 possible contacts also tested negative on both Fuerteventura and Gran Canaria yesterday. Epidemiologists are also studying the possibility that the virus may have been introduced to the reunion by children, who had previously been in contact with the virus.

Two other small outbreaks of four cases each have been reported on Tenerife, and appear to be confined to family situations.

Over 40% of recent outbreaks in Spain have been traced to family reunions. Some experts have blamed the relaxed atmosphere at such meetings, combined with deep-seated Spanish social customs of kissing, hugging and physical closeness.