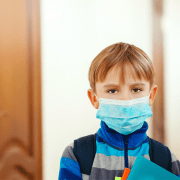 Spain’s ministries of Health, Education and Professional Training have presented a document that gives an glimpse of how different life will be be for schoolchildren when they return to classes in September after an unprecedented six-month break in attendance caused by the coronavirus outbreak.

Primary school pupils up to the age of 10 (fourth year) will be organised into “stable groups” of , ideally, 15 pupils, up to a maximum of 20. These will be allowed to mix freely without social distancing, and this organisation into fixed groups “will make tracing contacts quick and easy if a case arises.”  For pupils from the age of 10 (fifth year) upwards , tables will be separated by a distance of 1.5 metres.

Children at infant school will not have to wear masks, while older children will not be expected to wear them in class, but only in situations when  distancing cannot be guaranteed.

Much greater emphasis will be placed on hygiene in schools, with reminders about hand washing, not touching the face, etc. Each school must have a disinfection protocol which will involve classes being disinfected daily, while toilets and bathrooms will need three daily cleanings.

Windows must be opened before and after classes to ventilate classrooms, and “windows must be kept open as long as weather conditions permit.”

Spain’s parliament yesterday approved a minimum income for the most disadvantaged households in the country. The measure will assist 850,000 households and more than 2.3 million people.

The minimum income scheme will mean the poorest families in Spain will receive from €401 to €1,015 a month.  The measure was approved by all parties in congress apart from the right-wing Vox party, who abstained on the grounds that they believe the payments should be temporary and conditional on job seeking.

To qualify for the income, applicants must fall under one of 14 “types” of household. For example, a single person over the age of 23 and under 65, who  has not been employed for over three years, may qualify.  The income can be paid to those who are working, if their individual wage is under €200 a month, or average wages in a family are under €450. The income is means tested.

Prime Minister Pedro Sánchez described the measure as “historic … a new pillar of our welfare state which will make our country fairer”, while Deputy Prime Minister Pablo Iglesias said “there’s no such thing as freedom if you can’t make ends meet.”