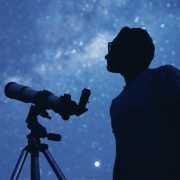 The Lockdown has reduced air and light pollution in our skies considerably, and this month all you need is a pair of binoculars, a balcony and a clear night to enjoy some of the most fascinating displays our galaxy has to offer.

Weather permitting, the 8th April will allow us to see the largest Full Moon of the year, with an increase of 7% on average size and 15% of brightness. This phenomenon is called the Super Pink Moon in the USA, although it has nothing to do with the colour of the moon itself – instead it’s named after a flower that blooms at this time of year in the Eastern states of the USA.

Later, from the 16th to the 26th, the April Lyrids will take place,. This is an annual shower of shooting stars that reaches its peak on the 22nd April. During the Lyrids, an average of 18 shooting stars can be seen every hour, and at their height you don’t have to watch the skies for long before seeing one. The 22nd of April is the day before a New Moon this April, guaranteeing excellent viewing conditions.

Lanzarote traffic cops guide
“We must not drop our guard.”