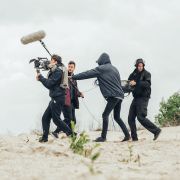 In a new series, we take a look at some of this island’s most famous and memorable appearances on film, TV and video.

Mararía is probably the most well-known Spanish-language novel about Lanzarote. Written in 1973 by the Gran Canarian writer Rafael Arozarena, it tells the tale of a traveller who arrives at the village of Femes in search of a woman known as Mararía. Now old, she has a mysterious and seemingly accursed past behind her.

The novel was adapted for cinema by Antonio José Betancor in 1998, and the film makes the most of the sweeping beauty of the island. It stars the well-respected Spanish actor Carmelo Goméz, Scottish actor Iain Glen and, in her first major film role, Arrecife lass Goya Toledo as the young Mararía.

Unfortunately, the book has not yet been translated into English and the film does not appear to have an English subtitled version, but you can get an idea of the romantic nature of the story from this trailer..

Hotels closed as Tenerife bears the brunt
Scroll to top