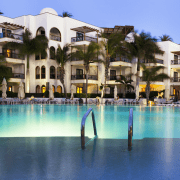 All hotels in Spain will have to close by next Thursday, following an official decree issued yesterday.

The decree orders the closure of all types of tourist accommodation, and states that closures must take place as soon as the establishment no longer has any clients on the premises. This must occur before the 26th March.

Lanzarote’s Cabildo estimates that around 3,000 tourists will remain on the island after being unable to find flights home, although they do not know the amount of independent tourists in rented accommodation.

The sixth day of the State of Alarm began with news of another death from coronavirus on the Canaries,., an 80-year old woman on Tenerife. Of the seven main Canary Islands, Tenerife has suffered by far the worst from the crisis, with well over twice as many cases as its similarly-sized neighbour Gran Canaria.

Meanwhile, El Hierro has not registered a single case, while the three German tourists to La Gomera who were the first cases on the Canaries have been discharged. Lanzarote has so far reported three confirmed positive cases, with no new ones registered for a week.

The Dr. José Molina Orosa Hospital in Arrecife has set up a special outdoor marquee to conduct preliminary assessment of potential cases. This decision was taken because there is not enough space indoors to safely comply with the necessary distancing measures.

Passing the test
Lanzarote on screen