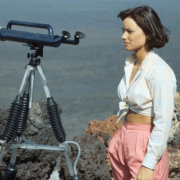 In the fourth edition of our new series, we take a look at some of this island’s most famous and memorable appearances on film, TV and video.

DR. WHO: PLANET OF FIRE

The universe’s most famous Time Lord last turned up on Lanzarote in 2014, when Peter Capaldi’s Doctor was filmed at the Volcán del Cuervo, among other locations.

But the first Doctor to park the Tardis here was Peter Davison in the 1984 series Planet of Fire. Unusually, an island that so often stands in for alien planets or prehistoric landscapes plays the holiday island of Lanzarote in this sci-fi series, in which the Doctor and his assistant Turlough encounter a holidaying American, Peri Brown, who would go on to become one of the Doctor’s favourite assistants.

In this clip we see Peri nearly drown off Papagayo, while the Doctor offers to pay for his drink with space creds in Orzola (we think – let us know if you’ve got a better idea).