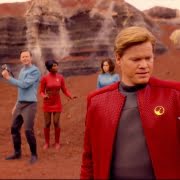 In the third edition of our new series, we take a look at some of this island’s most famous and memorable appearances on film, TV and video.

Charlie Brooker’s acclaimed Netflix series came to Lanzarote in 2017 to film scenes for its fourth season. Lanzarote locations popped up in more than one of the episodes, but it was the dark Star Trek spoof USS Callister that really made the most of the island.

Two main scenes were used: the Playa de Bermeja in Yaiza, one of the most impressive black sand beaches on the island , with the red Montaña Bermeja rising in the background; and the Rofera de Teseguite – an abandoned quarry in Teguise whose weird, wind-sculpted landscapes have taken many visitors by surprise.