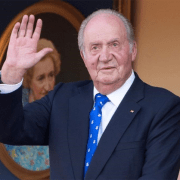 King Juan Carlos I has announced that he will leave Spain to live in exile. In a letter to his son, the ruling monarch King Felipe VI, Juan Carlos said he had made the decision to leave the Zarzuela Palace and move abroad because of the controversy caused by “certain incidents in the past”, and to allow his son to continue his reign “in peace and quiet.”

The decision is a further episode of disgrace in the later career of the man who became Spain’s first monarch after the 40-year dictatorship of General Franco.

A supreme court investigation was opened last month into Juan Carlos’s role in a Spanish consortium’s contract to build a rail link between the Saudi cities of Mecca and Medina. Swiss prosecutors allege that Juan Carlos received a €100 million account as a “gift” from the Saudi King, and withdrew €100,000 a month from the account between 2008 and 2012.

In 2016 he is alleged to have given his former lover, Corinna Larsen, €65 million from the account.

The revelation of the Swiss account forced King Felipe VI to halt his father’s annual stipend from the state in March, and renounce his own inheritance from his father. However, Juan Carlos will not be stripped of the title “King” yet, although this remains a possibility depending on the result of court cases.

Juan Carlos was already controversial when Franco installed him as monarch before his death in 1975. Juna Carlos’s father, Juan, was the true heir to the throne, but was overlooked by Franco as too liberal.  The young King’s younger brother Alfonso had died in 1956, shot by the 18-year-old  Juan Carlos “while cleaning his revolver.”

In 1981, an attempted coup failed when, in the early hours of the morning, Juan Carlos I made a TV broadcast supporting the elected government. The coup failed and Juan Carlos’s support for democracy hugely improved his reputation.

In 2012, as Spain continued to suffer form the financial crisis, reports emerged that Juan Carlos had injured himself while hunting elephants in Botswana. Photos of the King alongside a dead elephant disgusted the country.

In 2014, Juan Carlos abdicated, saying “I don’t want to see my son wither in waiting like Prince Charles

Hybrid buses for Timanfaya tours
Police to crack down on gatherings