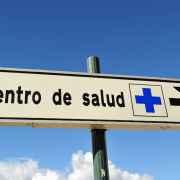 Yesterday, the Gazette’s designer noticed mucus coming from her one-year-old son’s ear. When she took his temperature, he had a fever.

She called her local health centre’s number and was told not to bring the child in unless it was an emergency. She was told to wait overnight and contact the health centre in the morning if symptoms persisted.

Later, the pediatrician called and repeated the advice that children were not to go to the centre except in a case of emergency, then told her to come to a back entry of the centre. There, the doctor quickly examined the child and issued a prescription.

The doctor recommended Dalsy, the most popular brand of children’s ibuprofen in Spain. When asked about the recent warnings about ibuprofen and its effect on coronavirus sufferers, the doctor said “It’s been announced that it’s fine.”

At the farmacia, entry was also prohibited to children. However, the staff were extremely helpful and issued all the necessary medicines.

The lessons are clear:

“No one will be left behind”
Scroll to top