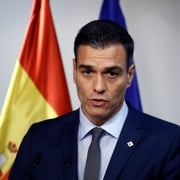 On a dark day for Spain, the President of the Government announced vast amounts of money to support the nation during the state of alarm to combat the coronavirus.

Referring to figures that revealed that the coronavirus is currently spreading faster in Spain than it was at the same point in time in China or Italy, Pedro Sánchez told a nation behind closed doors that “Although the contagion figures horrify us, we will resist; although it’s tough to keep our morale up, we will resist the blows that this virus deals out, we will not give up, and we will win.”

The president praised the efforts of medical workers and thanked the public for their response to the drastic measures introduced under the State of Alarm on Saturday.

“No one will be left behind,” assured Sánchez, promising “the greatest mobilisation of resources in history”, a sum of 200 billion Euros of public and private money that will be spent on alleviating the effects of the crisis.

Among the measures Sánchez announced after a meeting of the government are:

€600,000 for health assistance, above all for the elderly and most vulnerable.

Protection of electricity and water supplies, and essential services

Protection of housing: A moratorium on mortgages will be approved for those who are unable to work and, although no support will be offered to rental tenants, evictions will be suspended.

Salaried workers will be allowed to reduce their working hours by 100% to care for family and dependents.

Support will be given to working from home.

ERTE schemes which mean that workers remain contracted to employers but lose the right to wages, instead being paid 70% of their official salary, will be made flexible. Employers who take advantage of an ERTE scheme will be exempted from paying employees’ social security contributions.

€100 billion will be granted in guarantees to businesses, and the state will act as guarantor.

Spanish companies will be protected from acquisition by foreign investors.

Sánchez announced that €30 million would be dedicated to research into a possible vaccine against COVID 19.

These measures will affect millions of people in different circumstances in Spain, and workers, employers, the self-employed and others are advised to contact expert professionals who can help decide what is best for them.

“This is an unprecedented situation. There is no instruction manual,” said Sánchez , “But we’re counting on the knowledge of national and international experts. With our determination, nerve and resistance we will get past this moment.”

A message from Father Stan Evans, Anglican Chaplain to Lanzarote.
Scroll to top