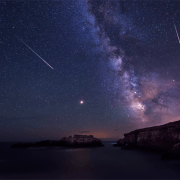 The Perseids, also known as “St Lawrence’s Tears”, are a phenomenon that takes place every summer , and are at their height between the 11th and 13th of August, when up to 60 shooting stars may be seen every hour.

This year, the waning moon means they will be even more visible than usual, with the only risk to visibility on Lanzarote being human light sources or cloud cover.  The Perseids are at their most visible in the hours before dawn.

The “shooting stars” aren’t stars at all.  They are meteors – fragments of dust and rock from the Swift-Tuttle comet – which flare up when they come into contact with the earth’s atmosphere.

The Perseids have inspired various artists. John Denver’s song Rocky Mountain High is based on watching the meteor shower from the Colorado mountains, while the Taviani Brother’s war film Night of the Shooting Stars is set in rural Italy during the night of St Lawrence.

Appeal to the young
Scroll to top