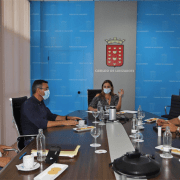 The President of Lanzarote’s Cabildo and the island’s seven Mayors have asked  the island’s residents to show “responsibility” and “not let their guard down” in the fight against coronavirus, as figures show that a large proportion of new cases are among the under-30s.

“We’re making a new appeal for people to show individual responsibility, to protect our won health and that of our loved ones, said Cabildo President Dolores Corujo yesterday.

The call came as another five cases were recorded on the island – one of which was a resident and the other four Spanish tourists.  Elsewhere, Gran Canaria is the island that is giving the most cause for concern, with a sharp leap in new cases on the island to reach a total of 291.

On that island, over 95% of new cases are young people under 30, a figure which reaches 80% over all the islands put together. Many of the new cases stem from private parties or family reunions, resulting in  several potential contacts that then have to be investigated, traced and tested

Canarian Health Councillor, Blas Trujillo, has issued a message for young Canarians: “ These youngsters are putting the economic future of the Canarian archipelago at risk,” he said. “If businesses are forced to close, then unemployment will soar.”

Trujillo called for youngsters to show “solidarity and responsibility” and promised that security forces would be intensifying checks on illegal parties and increasing fines on those that fail to comply.

Trujillo pointed out that, although many young people do not suffer from symptoms of coronavirus, they do form a vector of infection for more vulnerable people.  Another problem is the widespread isolation of potential contacts  “which exhausts our health system because of the tracing and monitoring involved.”

“One single party has meant that we have to trace dozens of people and ensure they go into self-isolation,” said Trujillo. This isolation causes widespread problems in the workplace:; “We’ve had to tell whole departments to go into quarantine,” said Trujillo.