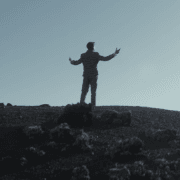 The music video for Blas Cantó’s Eurovision song has been recorded on both Lanzarote and Tenerife.

The song, titled “Universo”, will feature as Spain’s Eurovision song. Although it doesn’t feature many obvious shots of Lanzarote and Tenerife, there are clips of the island edited in between the dark and ominous shots of Blas Cantó with black shimmering figures dancing around him.

If Spain reach the final stage of the contest, Cantó will perform live in Rotterdam on May 16th. Which will hopefully display the video of the two islands behind him, to the millions of viewers watching around the world.

Click the video below, to see the music video for “Universo”.