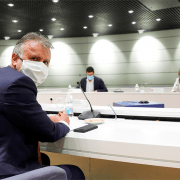 Canarian President Ángel Victor Torres informed islanders yesterday that he had received the assurances of Spain’s employment minister, Yolanda Díaz, that ERTE (furlough) schemes would be extended “for as long as necessary” after 30th September, when the current term expires.

Torres said that the minister had made it clear that “if it takes three months, it’ll be three months; if it’s six, then six” and that extensions would be granted until the Canarian economy took a turn for the better, instead of arbitrary cut-off dates such as Christmas or Easter.

Torres also said that workers who have spent 180 days on ERTE scheme would not see their wages reduced to 50%, but would remain on 70% of the normal wage.

Government representatives, unions and business associations will meet on Friday, September 4th to discuss similar ERTE extensions to  sectors that are indirectly related to tourism – an immensely important sector on the Canaries.

83,500 Canarian workers continue on ERTE schemes, making it the region with the fourth-highest total in Spain after Madrid, Catalonia and Andalusia.