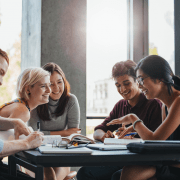 Recent visits from the UK’s largest awarding organisation, Pearsons, to the Colegio Hispano Británico in Puerto del Carmen, means that the Colegio is confident of soon being able to offer a whole new array of qualifications.

Already an official centre for Pearsons, the Colegio Hispano Británico would offer qualifications such as the Level Two BTEC qualification, which has the value of a GCSE pass; Level Three, which is equivalent to an A level, and Levels Four and Five: equivalent to the first two years of a university course.

This means a student would commence their university studies on Lanzarote then would only have to go to a British university for one year to be able to obtain a full degree.This would permit the school to officially extend itself in certain subjects at university level.

In the interim the school will be able to offer official international examinations in a wide variety of digital disciplines, and is contemplating other subjects such as sport and tourism.