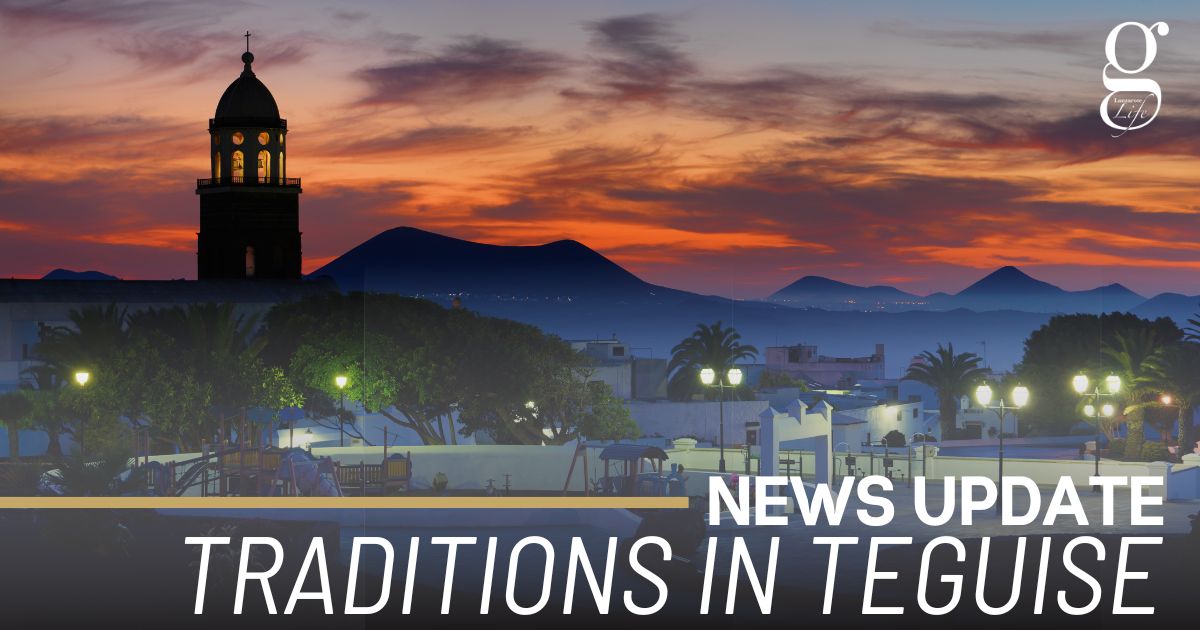 An ancient tradition that is most visible during carnival time in early spring, Los Diabletes de Teguise are an all-male group whose simple mission is to frighten people.

To achieve this, they spend hours creating terrifying horned masks in their workshop, dress up in a pyjamalike costumes designed by César Manrique, which are decked with straps and bells, then head out to the streets.

In Teguise, local children play a thrilling game of cat-and-mouse with the Diabletes, provoking them with the call of “Elegua!” before they are chased down. At carnival parades, the Diabletes simply shamble along in full costume, approaching the crowd, lifting the mask to their face, and issuing a loud, startling bellow.

In recent years the Diabletes have invited equally frightening groups from other towns, islands, and mainland Spain to join them in their antics.

If tourists know about Teguise, then it’s almost certainly because of the market that has taken place in the town on Sundays for the last 40 years.

Originally a craft market held in the central square of the town, with 16 stalls selling pottery, basketry, and other crafts, it rapidly became a tourist favourite and expanded.

Recently, the market has been moved out of the streets of the town where it began and occupies the Parque de Maretas, where stalls selling local crafts and farm produce jostle with cheap souvenirs and leather goods that have nothing to do with the island. It has lost some charm as a result, but visitors should still take the time to wander around the lovely streets of the old town, where dozens of shops, bars and cafes can be found.

The Festival Enogastronómica Saborea Lanzarote, to give it its full name, celebrated nine hugely successful editions before Covid brought it to a halt in 2020.

A fascinating celebration of Lanzarote’s produce, cuisine and thriving catering sector, the fair attracts several thousand visitors, all of whom want to sample the delicious food and drink on offer, attend cooking displays, take part in competitions, and see celebrity guests.

The 3rd of May is the Day of the Cross, when Teguise believers display crosses that have been carefully decorated with flowers.

Last month saw the Fiesta de Carmen, Teguise’s patron, which is celebrated with local music, sports food, and processions, but it’s August the 5th that brings the town’s most picturesque fiesta.

On that day, locals make their way northwards for eight kilometres, up the long ridge to the lonely Ermita de Las Nieves. Some wear traditional dress and ride on donkeys, others scramble up the cliff itself from Famara. The image of the Virgin is removed from the church and paraded, her white and gold robes glinting in the August sunshine. Then the party begins.

Christmas also brings an unforgettable spectacle – the Misa de Gallo (Cockerel Mass) on Christmas Eve. Locals prepare a living tableau of the nativity scene, and a traditional performance is given by the Rancho de Pascua, a folk group who dance and play ancient instruments such as swords and drums.

The “White Night” is relatively recent initiative in Teguise. Starting in 2011, this is purely an initiative to help local businesses. It does that by opening the town for business, with food, drink music and plenty of activity.

Those who attend are requested to wear white for the evening, although this is by no means compulsory. This year’s Noche Blanca returned on 22nd July, but it’s certain to be back next year.

For the love of food
Scroll to top